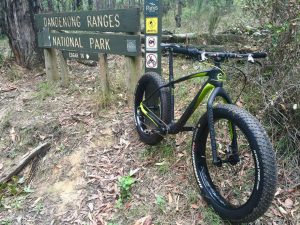 Fat-Bike.com has got one of our bikes for testing. Their initial impressions of the Diamant F1-LTD are on the Fat-Bike blog Thanks to the … efficiency … of the courier company, I had to collect the bike from a depot across town, and yes, loading the box in the car did seem suspiciously easy.  Not heavy.  Getting it home to unpack was like Christmas, but better, because you get what you want.  As the pieces came out it became apparent that this was not a bike that was going to, say, set off a metal detector.  This was carbon at it’s finest.  I weighed the seat and seat tube together.  270g.  11 oz.  That’s BS.  (Another useful acronym). When it was built I realized this was a fascinating bike.  It had been designed solely as a bike to win races on, and the mantra being chanted in the background was “remove weight, add speed”.  Nothing else mattered.  These days most bikes try to offer versatility – extra rack mounts, additional bottle mounting points, flexible wheel and hub configurations, but here it was not so much what might the customer want as what can the customer do without?  As a result it is one of the most focused bikes I’ve seen for a long time, even to the point of running 4” tires on 80mm rims.  So small, many might say.  Why?  Most race courses are groomed enough to not need the full float option of big rims and tires, and smaller ones are, you guessed it, lighter.  Faster.  You can do without the extra inch of rubber.  You can do without metal.  You can do without lots of things, which makes this bike just awesome. So you get a carbon frame with internal cable routing, carbon fork, and both appear to have clearance for bigger rubber should you desire.  Carbon railed seat from Selle San Marco, carbon post, carbon bars from Answer, SRAM 1×11 drivetrain with Gripshift, and Formula R1 brakes.  On the Pirate’s Shed’s Scales of Justice the bike when built weighed in at an actual 8.8kg, (19.4 of those American pounds) without pedals, and I felt guilty bolting on my Crank Bros eggbeaters. With their chromoly axles, plus the air I put in the tyres the final build weight was approaching 100g past the 9kg mark.

I couldn’t resist a quick spin to take a few photos, despite rain and a severe weather warning, and the initial reaction is that the laws of physics are just something that happens to other people.  This thing is stripped down and speedy, but not so aggressive it has no manners.  More on this down the track, though…

Test bikes of this caliber are in great demand, so sadly this will not be an extended test as we often see here on fatbikedotcom, even though I offered to keep it for two years, just to be sure.  I will have it for just a few weeks to bring you, our valued readers, an insight into what could be considered a current pinnacle of development, a coalescing of what is possible with today’s technology.  Stay tuned for the results of this adventure.